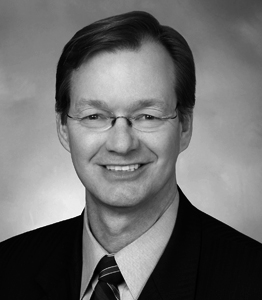 Kenny Hulshof is a former congressman from Missouri.

Prior to joining KBS, Kenny served with distinction in the U.S. House of Representatives for 12 years (1997-2009), representing Missouri’s Ninth Congressional District.

After defeating a 10-term incumbent in 1996, Kenny was appointed by then-Speaker Newt Gingrich to the powerful Ways and Means Committee. He served on this prestigious committee during his entire congressional tenure and was a member of the Health and Trade subcommittees, as well as the Budget Committee. He established a strong national reputation as a leader with integrity on the House Committee on Standards of Official Conduct, also known as the Ethics Committee.

He also championed legislation reflective of his diverse district: education savings accounts; biofuels incentives; telemedicine and health information technology initiatives. Kenny was a key player during the consideration and passage of significant tax legislation in 1997, 2001, and 2003.

Prior to his congressional career, Kenny served as a special prosecutor in the Office of Missouri Attorney General. He also held previous positions as an assistant public defender and assistant prosecuting attorney for Cape Girardeau County, Mo. Certified as a specialist instructor in criminal law, Kenny frequently lectured at law enforcement conferences and seminars throughout the Midwest.